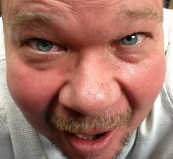 For years, you may remember Mike (or Mark as he was known then) as part of the KML morning show... since then, Mike is all grown up and now can be heard weekday afternoons from 3pm-7pm on 100.7 The Bay.  Mike likes to let what little hair he has left down with the College of Classic Rock Knowledge a little after 4pm... and LIVE AT 5! at 5pm.  And- the newest feature is the Top 3 at 3 where Mike plays the Top 3 songs from a category to be determined every day...

Mike is a native of Middletown, Pennsylvania, and has worked in radio since 1978 (at the age of 14).  Ondayko has hosted morning shows in Harrisburg, Atlantic City, Pensacola, and Augusta, GA before coming to Baltimore in 1994.

Mike is a four time co-nominee (with Kirk McEwen and the late Bob Lopez) for Radio and Records' Morning Show Personality of the Year... and joined The Bay  in June of 2011.  He and "Highly" have been together for 9 years and he has two beautiful daughters- who are 15 and 4!  Mike's hobbies include laying on the couch, watching tv, and golf  he is an avid Orioles fan as well as a rabid hockey and football fan.  His favorite artists include Bruce Springsteen, The Moody Blues, Rolling Stones, The Who and Steely Dan and he's been known to like the occasional Knob Creek neat or a Manhattan made with a good blended whiskey.   Mike currently calls Anne Arundel County home.